Home All Vids The Teaching Method in Ballroom Dancing 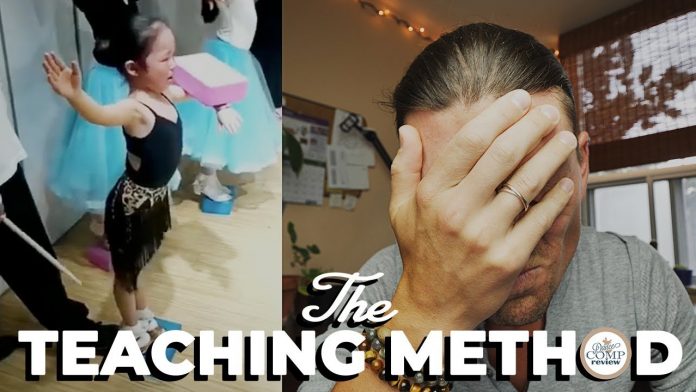 The teaching method in ballroom dancing is something that has been bothering me since the time I started teaching. Every year, little by little I started realizing that what I’ve learned from my teachers (or, at least my perception of what they were telling me) does not entirely match to what I should be teaching my students. Finding the video with the little girl definitely sparked a thinking process and a desire to create a response.

This response video took a while to make. Not just because a video like that is technically difficult. No. These were emotions mixed with obtained experience and analysis that had to be put in words.

I’m glad it’s out. Definitely a weight off my shoulders.

Transcript of the video:

This video, which is most likely from China, first surfaced on Ballroom Dance Tube. I thought that this topic was pretty relevant, as it shows the hidden sides of our “Oh, so glamorous” Ballroom Dance Industry. But, as it comments show, people were furious with what they saw.

It was completely bombarded with negative comments when I reposted it on Dance Comp Review. People went furious with this method. I even got privately messaged with accusations of supporting this teaching method, just because I shared it.
Well, you know what? I am going to shamelessly bring this up again, because if such a thing exists in our industry, and it makes a negative impact – then it is something to be changed.

So, the main purpose of this video is to bring awareness, understand why such methods exist and encourage change. But, if you’re the kind of person who only chooses to see the “shiny, flashy and beautiful” sides of ballroom dancing and completely refuses to acknowledge what’s in the dark, you should probably turn off this video and keep your pink shades on while you’re at it.

But, if you’re ready to face the truth of the things some dancers go through – stick around… We got some stuff to talk about.

Fact #1 – There are at least 5 girls visible in the frame. All of them are standing on the balls of their feet on the edges of the soft blocks. They are holding their frames up and all of them have an additional soft block placed on their left arm.

Fact #2 – There’s only one girl crying in this video. We don’t know exactly why she is crying. She’s really sobbing up in the beginning of this video, especially when she was tapped by the stick. Then, as the video continues, she’s wiping some tears and slowly calming down.

Fact #3 – The sobbing girl was the only one that received the “tapping” with a stick. The teacher did not use his hands to physically hurt her, or anyone else in the video. These were 3 taps delivered to the butt area, while he was supporting her heels with his foot.

Fact #4 – The face of the teacher was not visible in this video. Whether that was intentional or not – we don’t know and we also don’t know who this teacher is. It seems that the camera is pointed directly at the girl, but that can also be debatable.

This Method is Not Personal – It’s Cultural.

Having to grow up in an environment where it is completely normal to spank you kids to teach them a lesson, this video, for me personally, did not spark such a roller coaster of emotions as it did to others. I, personally, think that it has to do with the environment that we as kids grow up in.

And obviously that environment and our community have a lot to do with how we act later in life. You know, a certain kind of behaviour is appropriate for a certain kind of culture. For instance, in a Russian culture, which I was raised in – up until a certain point, a similar method of dance education is fairly common.

“Dance Sport is no fun! You want be good? You leeeave your blood, sweat and tears on zis floor. Go!”

But, when my culture changed, so did my approach to dancing.

“Okay! We’re gonna do this! It’s gonna be hard, but with perseverance we will succeed!”

I also believe, the culture is completely shaped by the historical events of a country. So, for example, both Russia and China are known for their Communist regime. Historically, athletes that trained in this system were raised to be the “Champions” and “get the gold medal” no matter what. On the contrary, the Western mentality is mostly the opposite – “It should be fun”, “it should be exciting”, and if we don’t win, well at least we tried!”

Since ballroom dancing is a PERFORMANCE Art that is popular around the world, each culture will have it’s own approach to how dancing should be taught. The good thing is that we now have internet and the borders between countries are completely open, which allows us to share and change the way we approach dance education.

Awareness is NOT Promotion.

Have you ever seen these horrific videos of how animals are treated and slaughtered for food? Or, how they’re being mass produced, and the kind of hormones are being used to enhance the growth process. And all of that, so we can have an affordable piece of meat for breakfast, lunch and dinner. There are thousands of videos streaming on the Internet to exhibit the whole “behind the scenes” of meat production. In fact, these videos are one of the main reasons that a plant based diet is getting very popular now. This means, after watching these videos on the social media, people are consciously choosing to change their diet. But the best part is, food industries are forced to change and accommodate the consumer.

“How dare you compare kids and animals!…”

The video of the little girl you saw has nothing to do with the promotion of a teaching method. Videos like that are being posted to bring awareness of the existence of such methods and encourage the dance instructors to think and rethink the way we educate our students. But, if you’re a strong believer that videos like that should NOT circulate the net, well, good job on sweeping the problem under the rug, pretending that ***nothing like that exists in our industry***

By posting these videos parents who are thinking of bringing their children to ballroom dancing also get educated. After watching such content, I’m pretty sure parents will be aware of these methods and pay clo-o-o-ose attention to what ballroom dance teachers are going be doing with their children.

To sum this up, I believe the purpose of this video was to objectively look at why such methods exist. Like I said before, it is not to promote but to encourage change for better dance education, and to bring transparency onto what is happening behind the scenes of our industry.

What you have heard in this video is my point of view based on personal experience and analysis.

Do I support this method?! NO, I DON’T! Because I’ve learned that there are other ways to develop great dancers.

But, if you still decide to accuse me of supporting such harsh actions… Let’s just say that I can only control what I say, and I can’t control what you think.

Hopefully this video finds you well. Share it with a friend to see what they have to say about this situation. Thanks for watching. I’m Egor Shalvarov and I’ll see you in the next one.