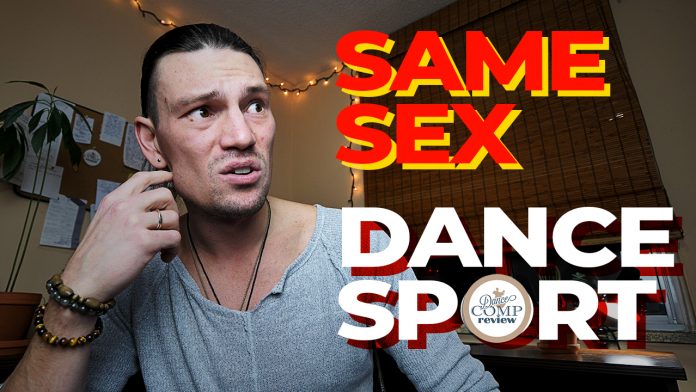 It is the year of 2020 and we might think that humanity has come a looong way when it comes to sexuality. But, in reality, the tolerance of non traditional romantic relationships is far from ideal. Even though we’re starting to accept same sex relationships on a global scale, to this day, some countries still have a death penalty against untraditional relationships.

But this video is not going to be about sexual preferences. Even though sexuality as a whole is intricately connected to expressing our emotions through dance, we’re going to narrow our point of discussion to just that – same sex, or same gender in dance sport.

On September 14th 2019, National Dance Council of America has made a change to the NDCA Rule II.A.6.a., stating that: “…as of September 23, 2019, a “couple” will be defined in Section II.A.6.a of the NDCA’s Rules & Regulations as a leader and follower without regard to the sex or gender of the dancer.  Accordingly, beginning on September 23, 2019, same-sex/gender neutral couples will be able to compete with opposite-sex couples in all dance genres included in championships, competitions, and events sanctioned by the NDCA.”

USA Dance followed suit, and is also implementing appropriate changes with their newly made Gender Neutral Committee. And the cool thing is that in the article, it specifically states that: “…GNC thus far has been crafting a plan for gender-neutral implementation that accompanied a USA Dance motion to the World DanceSport Federation (WDSF). The motion aims to change the definition of a couple from a “man” and a “woman” to “two athletes” to allow competitors of any gender configuration to compete, and to be able to represent their country at world championships.”

At the time of recording of this video, WDSF is definitely NOT on board with it yet, as their policy still states that: “2.1.1.A couple consists of a male and a female partner.”

But, HEY! British Dance Council is totally on board with mixing same sex and opposite sex couples since 2014.

Whether there were lawsuits against our favorite dance federations or not, we seem to be moving in the direction which will allow a much bigger diversity in the dance sport industry. And rightfully so … [Ref.: Video – Tony Dovolani’s “It’s almost 2020. why are we even discussing this?…”]

Exactly! It is time for change!

BUT! In order to make this review as objective as possible, I’m going to my beloved South Open DanceSport Championships to ask fellow dancers and officials some uncomfortable questions regarding this topic.

Back in a flash! So what have we learned? A whole lotta diversity in response. Some are totally for it and don’t see such changes as something bad. Some are still hesitant and questioning whether the “TRADITIONAL” element of ballroom is going to be lost.

But, before I jump to summarizing my conclusions, there’s one more person I need to ask about this topic: Nikolay Shpachov is a professional latin dancer with many years of experience in “traditional” ballroom dancing, but for a few years now he has been competing at the same-sex events like April Follies and the Gay Games in Paris.

If you want to watch the full interview with Nikolay on same sex dancing, since he had done it all, a little notification icon should appear in the corner there. If it doesn’t, well that means it’s not out yet.

So, what is the conclusion on this?

Whether same sex dancing is going to be good or bad for our industry, that, as you saw earlier, depends on each individual’s perspective. Some say it is beneficial as it will bring more crowd diversity into our industry and open new horizons for ballroom competitiveness. Others say, with all due respect to the LGBTQ community, that the “traditional” way of dancing, which involves the man and a woman should be kept untouched.

Both sides have the right to be there, as both points of view bring valuable arguments to the table.

But what do I conclude for myself? Well…  I just feel that “change” is inevitable. Our industry is entirely dependent on the state of global affairs. So, if a change like that is shaking our industry’s standards out of balance, well that means it is time for us to revisit our values and make necessary alterations.

But I pass a question onto you now. What are your thoughts on the Same Sex Dance Sport and how do you forcee the future of Same Sex dance sport in the the ballroom dance industry? (The Internet could get absolutely ruthless on opinions, so you can just say “We’ll see what it’s going to be” in the comment section below.)

Thanks for watching this Dance Comp Review episode, I’m Egor Shalvarov. And I’ll see you in the next one.