Holiday Dance Classic was once again what it always promises to be. Huge, well-run and fun. A perfect way to celebrate the Holiday Season in DanceSport. No one who had the privilege of attending the closing show at Holiday would ever speak about this competition without mentioning that show.

The show was simply outstanding. Twelve unique and memorable routines made it a thumping holiday spectacular. It was a nice coincidence perhaps, that there were 12 routines, given that the competition weekend marked the start of the “12 Days of Christmas”. The show truly kept the audience on the edge, carrying us up and down, with fun and passion, and a stunning and intense tribute to a lost friend, which showcased the deep emotional power of dance.

With the 1st performance, even the most blasé audience member, who may have attended countless dance competition shows, would still have taken note of the opening drum and drummer. Louis Bar caught all eyes, in a glory of red, which well suits his overwhelming charisma.

With the 2nd performance, without as much as breath in following the first, a v-shape formation of colorful gypsy girl dancers came dashing in, led by JT Thomas, putting the charisma in overload. Her obvious enjoyment and energy in even the slightest of movements set the tone for the rest of the show.

For the 3rd performance, I tried to be logical, as I am much of the time, so I spent a moment trying to anticipate the next wave. First of all, I again did not have a moment. Then I saw a true wave of cocktail waitress-like tutu wearing ballerinas, with their dapper partners, including Canadians Dmitry Ilyushenov and Kateryna Stytsenko. I then realized I had to give up trying to anticipate, and just let myself experience this ride.

Gearing up for the 5th performance, I fully expected the unexpected, yet I still took a gasp of air when from the corner of my eye Jaimee Tuff was riding high on Travis arm, flying into the ballroom with a streamer in tow.  The pair were about 14 feet tall from toe to tip.

With the 6th performance, we were brought back to earth and emotionality, with a soft and romantically passionate waltz showdance.

Since this was a rollercoaster ride, after this flow, the next “logical” thing for the 7th performance was bounce. And without adieu, an enormously talented crew of Utah based acrobatic of young male and female dancers, who looked about 7 to 14 years old, came bouncing in.  Some were dressed in 20’s style paperboy outfit, which fit the Charleston/hip hop dancing that framed their acrobatics. The floor literately shook from their non-stop jumps, kicks and turns. Their fresh and engaging energy nicely fit the name of their studio, Vibe. I am sure their mentor Rick Robinson was proud.

I hesitate to say that I had a favorite part, because each segment was outstanding in its own way, but the 8 Latin dancers in black in the 8th performance deserve to break YouTube when a video of their performance is posted. Their hip motion drew ooooos and aaahhs from this well-seasoned ballroom crowd.  The beauty of basic motion was accented by perfectly executed complexity in individual and formation moves. The formation actually created human geometric structures – stunning. The choreographer of this piece really deserves an award. As for the dancers, the tone of the piece was set most clearly by the style of Pasha Stepanchuk & Gabrielle Sabler – adult amateur champions, and was well matched by every single member of the ensemble. It was a brilliant showcase of the talent and discipline of the Brooklyn Dancesport Club. Power, elegance and restraint built tension throughout the piece.   The crowd rewarded this group resoundingly with applause and comments.  I could have seen this whole group, both male and female in dark glasses and costumes with a leather base and some mesh for contrast and movement.  But then again maybe not… the leather and shades thing might have been overdone.  I truly tried very hard to find criticism or suggestions. It is extraordinarily rare for it to be so hard for me to find a correction, but to be honest, I had none. At one point, however, the whole mood was shaken momentarily a scream. I was not sure why there was a scream, but it somehow seemed to work given the intense emotionality of the dance. After the performance I learned that this piece was dedicated to a young compatriot of the dancers, who had passed away. When art is as powerful as this was, it can only come from real emotion. I will remember this piece for quite a while.

After this intensity, the 9th performance was a release of 3 Matadors lead by Ray Rivers. With the pulse of “Aussietestosterone” in play, Toni Redpath led an equally strong female crew, breaking through like wind in the desert. Nothing was going to get in their way.

With the 10th performance, the lovely Lorraine Barry was joined by a sexy band of gentlemen, Paul Holmes, Nick Kosovich, Philip Nicoolas, Gary Edwards and Graham Oswick. They danced a fun and fierce Latin piece to the beat of Blurred Lines. My only comment is that given the song and the “caliber” of gentlemen, Lorraine would have done well to insist on less clothing for her entourage.

Latin moves with a drum beat followed in the 11th performance with the powerful duo of Melissa Dexter and Giacomo Steccalia. They danced in a way that actually made you aware of your own heartbeat.

The Latin passion continued with a cha cha cha from Eugene Katsevman and his talented and good-looking boys in the 12th performance of the spectacular.  Then came the entrance of Maria Manusova for the finale fire with Eugene. Here is a little glance of that:

It is rare to write review in such detail regarding the actual elements of a show, but I truly feel sorry for anyone who missed it, hence my obligation to share.

All in all, it was a very good night! 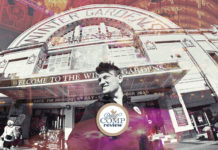 One Trip To Blackpool 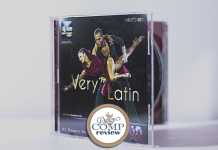 Can Your Choice of Dance Music Help You Practice Better?