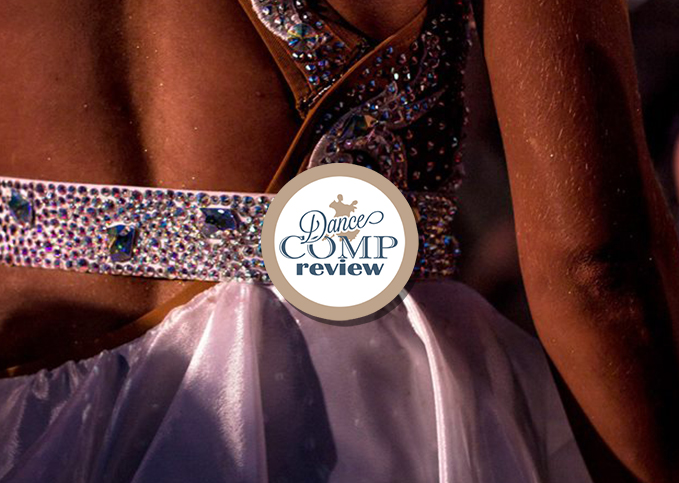 To find out, we decided to ask a Ballroom Dance costume designer, Dawn Smart, the owner of Doré Designs. And this is what she had to say:

First, I need to note that the most delightful thing about ballroom trends is that they are slightly quirky. A Latin dancer from Slovenia, making her own dress, can try something new and people will draw on that. In mainstream fashion, there are trend services that a designer pays dearly for, that predict colors and style concepts for the next 4 fashion seasons. In ballroom, literally a mistake can create a trend.
What mainstream fashion and ballroom fashion have in common is that things go in phases. Skirts get higher, dresses get riskier. Embellished gowns seen on the red carpet lead to more stones or lace used on the dance floor.  Typically this is reflected in the dancers who are trying to create their own “partnership” brand. Professional and Am/Am dancers around the world look to be distinctive beyond the scope of their dancing. Hair and makeup are a part of that, but a skirt that is repeated throughout a season, and set a couple apart from the crowd immediately – you can often see the dress before you see the face. A classic example would be Gaynor Fairweather’s drapey column dresses with the back slit. You knew immediately that it was Gaynor. Current dancers seek similar recognition – but, they draw on mainstream fashion to guide them. Follow red carpet gowns on Pinterest, and watch all the rounds at Blackpool. The cross reference is amazing.

You can often see the DRESS before you see the FACE!

The US ballroom market provides a complicated trend issue. We have 5 distinct styles of dance – American smooth, American rhythm, Intl standard, Intl Latin and Theatrical. People might say theatrical is too story based to be trend worthy, but I disagree. If you go back in American theatrical history, our icons told their dance stories while remaining true to themselves – Marianne Nicole, Cher Rutherford, Luann Pulliam never looked like anyone but themselves on the floor.  After their eras, I think theatrical became a “flowy, romantic dress” for so long that it became difficult for a more athletic girl to have her place among the ballerinas. Theatrical has been and will continue towards a cocktail style in 2015, unless of course, you are performing an exorcism or doing Lindy ariels.  A true story, obviously told in 3 minutes, trumps style. A beautiful communication through movement to a lyrical, heart tugging piece of music is where the style trend will be seen. Think less contrived costume and more “dress” oriented. And it will carry on to show dance also.

American Smooth is going through the biggest style changes in the professional ranks of all the  dance styles and those changes are now starting to show up in the Pro-Am floor. Skirts have been very similar in construction for almost 9 years. Fitted through the hip with a dramatic flair at bottom. The concept came through movement and classic style. American Smooth is often described as having Latin movement combined with an open position Standard. Truly it is so very much more, however, in terms of dress, a tighter bodiced dress, with a skirt enhancing the movement lends itself to the concept of a Latin dress with a single layer moving, full length skirt. Going back through history, dance icons in movies have embraced this same idea. Generally in the movies, you could see their curves no matter what they danced. Today several of our current dancers are the face of change in all that. Galina Detkina, Maria Barsukova, and Victoria Dias have embraced swirling fabrics on their torsos. The effect is stunning and while not for everyone, is bringing fabric changes (more georgette and silk chiffon), embellishments (pieces of extra fabric and textures) and total style changes (open hips/slits, graduated skirt lines and multi-layer skirts). Smooth style has become more conservative in the last few years and will be returning to a sexier fresh look to counter balance the softness of the new fabrics.

American Rhythm, in my opinion, will be having a Renaissance moment this next year. Anytime there is a major change at the top of the style involving not only couples, but couples whose philosophy and approach to the style is wildly different from the past, there will be an exploration in style all the way down the ranks. Rhythm, unlike Latin, was supposed to reflect and characterize dances from the melting pot culture of America. Therefore, there is real room to play on that. I believe Nazar Norov and Irina Kudrashova have changed the way we dance or want to dance rhythm already. And that makes it almost impossible to wear “just” a dress. This should be trickling into the pro am world by mid year at the open level.  Think cultural dance style history, whether out of Harlem’s nightclubs, Miami’s Cuban community or the iconic Swing scene. And it will be important for couples to reflect each other.

International Standard has several style influences beyond just the dancers. Gowns are different from the WDC to the WDSF, from Pros to Amateur divisions, from country to country. Skirts have been moving towards tulle for almost 4 years now. It has advantages over other skirts as it creates an extremely light appearing skirt. I think because of that, it’s here to stay, but not only in layer upon layer. It will used in overlayers, underskirts and embellishments. The other main trend will be detail and embellishment. Pearls, flowers, jewels, detailed stonework, lightweight feathering, textures, broaches, etc. are becoming more and more important for standard. An AB scatter of stones will no longer be acceptable. Think feminine, ornate and lightweight.

Lastly, International Latin.  It is a dance style that is comprised of a lot of individualists.  And designers who are innovative, but not necessarily trend oriented. If a couple is their own “brand”, consistency should be important in some way, however, it’s more rare in Latin than the other styles. For example, Anna Kovalova, is always amazingly sexy, however, put her dress on someone else, and you might not know it was Anna’s. So the trends will be more general – similar to Standard – embellishment, details and texture will be important. Predominant colors will be black, red, nude and white. And beaded fringe will play a huge part of the movement factor of the dress.

2015 will be a fantastic year for ballroom. And a beautiful one also. See you on the dance floor! 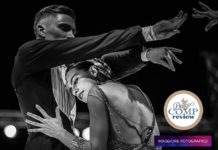 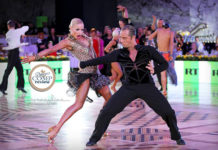 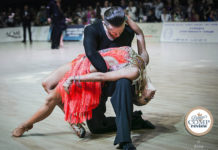